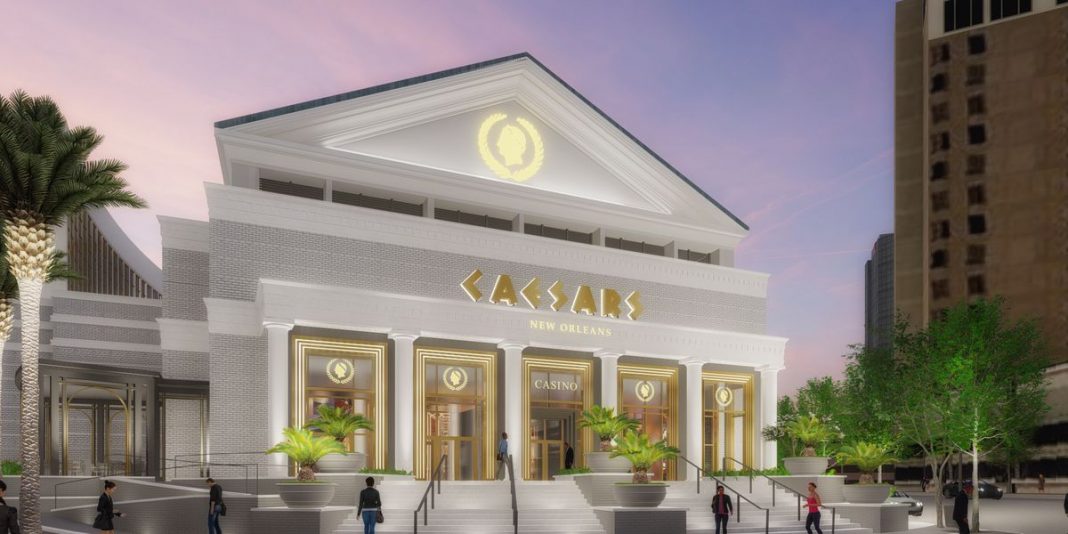 Big plans are in the pipeline for Caesars Entertainment Incorporated. In a recent press release, renovations have just been announced for the iconic Harrah’s New Orleans property. Seeing as around $325 million will be used to renovate and expand the full property, this is hands down one of the company’s largest investments to date. Judging from the company’s track record and portfolio, we’re excited to see what they have up their sleeves for this renovation project. Let’s take a closer look at the details.

Before we delve into the upcoming renovation plans, we thought the venue’s history warrants a mention. Harrah’s New Orleans Casino first opened its doors to the public in 1999 on Canal Street, right in the heart of downtown New Orleans. Located just steps away from the French Quarter, it is the sole land-based 115,000 square casino venue that is houses over 1,400 slot machines, 130 table games and 20 poker tables. In short, it is a gaming paradise for any casino enthusiasts out there.

The hotel opened a couple of years later, precisely in the year 2006. Featuring 450 luxurious rooms, the hotel served as the perfect addition to the casino, especially due to its great location on Poydras Street. As you can tell, the venue has an interesting history and we can’t wait to see how it will be enhanced thanks to this renovation project.

Without any further ado, let’s delve into more detail about what the project actually consists of.

On Tuesday 8th December 2020, Caesars Entertainment, Inc. issued a press release to announce the company’s plans for the popular New Orleans venue. Harrah’s will undergo a major makeover as it soars to become a leading flagship resort by the end of 2024. Without a shred of doubt, this $325 million project that is set to exceed expectations.

Bearing in mind that this is an award-winning casino that has been part of the Caesars Entertainment name for years, the company is set to pull out all the stops here. The aim is to feature the ‘the elegance and indulgence’ that the venue is known for.

So what should we expect out of this renovation project? After all, it is worth $325 million so we’re expecting to be wowed here. Lucky for you, we have some insights from the preliminary plans that were unveiled last Tuesday. Here’s what you can expect:

• A stunning hotel tower above featuring no less than 340 rooms within the already existing entry to the 115,000 sq ft casino
• New ventures in hospitality and culinary
• Further developments on the unoccupied second floor of the casino
• A complete makeover of outer and interior along with other enhancements

He further commented that, since they are the sole land-based venue in the city, they are extremely dedicated to preserving their 20-year-old history in New Orleans. The renovations will in no way destroy what was built along the way, but they will be fulfilling a lifetime commitment.

Along with the renovations, Tom Reeg also stated that this project will open more doors for occupation opportunities. In fact, this $325 million development will create 600 temporary jobs, as well as 500 permanent positions that will generate millions in tax revenues to New Orleans and Louisiana once all works are completed.

Without a doubt, this all looks very promising. In fact, more notable people working on the project shared their thoughts on the matter.
Harrah’s General Manager – Mr Samir Mowad states that since he was born and bred in New Orleans, he is delighted that the company is working with locals. He feels that their help will further enhance what the vision they have for Harrah’s. He believes that the plans that were unveiled today are just the start of an exciting project that will bring more excitement to New Orleans.

LaToya Cantrell, Mayor of New Orleans, is hopeful that this project will further put New Orleans on the map. She also hopes that the newly-renovated venue will generate more revenue and to move projects forward that create more job opportunities for locals and tourists. She adds that thanks to this project, New Orleans will be renowned as a city that offers something for everyone within the cultural and entertainment industry.

Now that you have a full breakdown of the plans that have just been release, we thought it’s time to give the umbrella company a worthy mention.

As most of casino enthusiasts know, Caesars Entertainment Inc. needs no introduction. Seeing as the company owns none other than, the following resorts: Caesars, Harrah’s, Horseshoe and Eldorado, the stellar portfolio speaks for itself. It is not only one of the biggest casino-entertainment companies within the United States, but it is also a world-renowned casino provider.

Ever since it was founded in Reno, Nevada back in the year 1937, Caesars Entertainment Inc. has sought to become a leading household name. The company has climbed up the ladder through its consistent development of new venues, acquisitions and other further expansions. All guests who visit these casinos are promised exceptional customer service, excellence, and technological leadership. In short, each unique resort promises an experience like no other. Ultimately, the company’s main focus is on brand loyalty and generating value through this combination of factors.

We have no doubt Harrah’s renovations will be another success story for the company.